Ah yeah beer. The staff of life, liquid bread. Is there anything in this world finer (or healthier) than a nice glass of beer. It is even pretty to look at. Here is a beer posed in the forest in my backyard. It happens to be a home brewed Belgium wit made with coriander seeds, orange rinds and spices. Doesn't it make you thirsty? Admit it, you would love to taste this beer right now especially if you were setting on our deck in the forest. 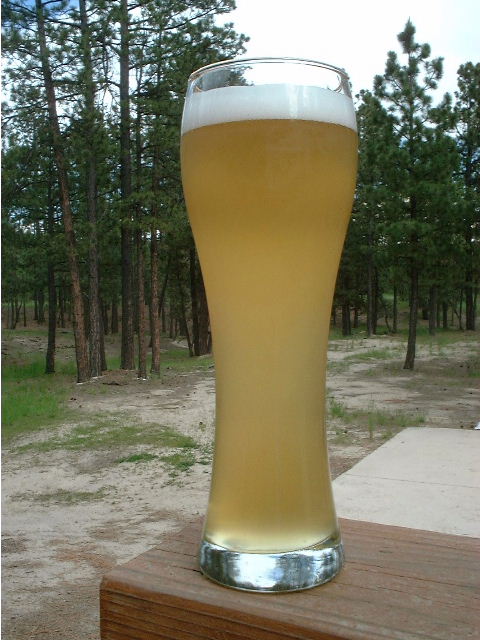 or how about these two beauties. Two home brewed pilsners in matching outfits. 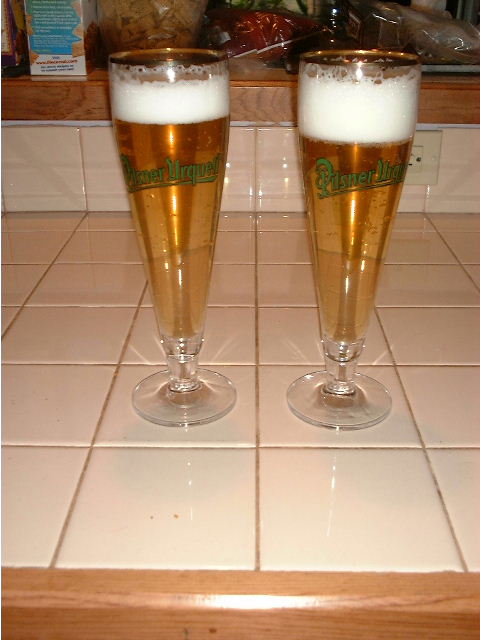 I guess I am what could be referred to as a beer snob because I will only drink home brewed or micro brewed beer. No Coors or Bud for me. Most mass produced beer in America has little or no flavor and must be drank extremely cold so it cannot be tasted. Ever drink a warm Bud, yuck! Some of the large breweries are acknowledging this fact and are starting to produce beer with flavor. The micro brew revolution that has taken place in America in the last decade has caused this change to occur.

For the longest time it was hard getting good beer in the US. I, for one, was forced to drink imports because I couldn't stomach what Americans called beer. For this reason I started brewing my own so I could determine the style and makeup of my beer. My first batch of beer was made from a kit Heather got me for my birthday one year. That must have been about 1985. Since then Heather and I have probably brewed 130 batches of beer and some 20 meads. We have also done our best to spread home brewing to as many people as possible. Over the years we have probably taught 15 people to brew.

Beer is made up, for the most part, of four basic ingredients: malted barley and/or wheat, yeast, hops and good old water. The brewing process is simple and can be summarized in the following steps. The most important thing about making beer is to always make sure everything is clean, clean, clean!

1. A wort is made with water and malt extract (either purchased or mashed from grain) and prepared for boiling. Here is a picture of me boiling my home brewed beer outside our house. 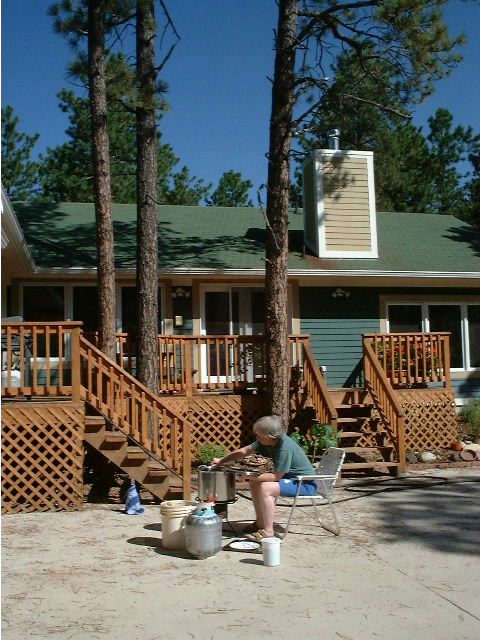 2. As the wort is boiled, hops of various varieties are added depending upon the style of beer being brewed

3. After boiling, the wort is chilled and yeast is added (called pitching the yeast)

4. The cooled liquid is placed in a fermenting vessel (usually a glass carboy) and a bubbler is attached which allows the carbon dioxide produced by the fermentation process to blow off. 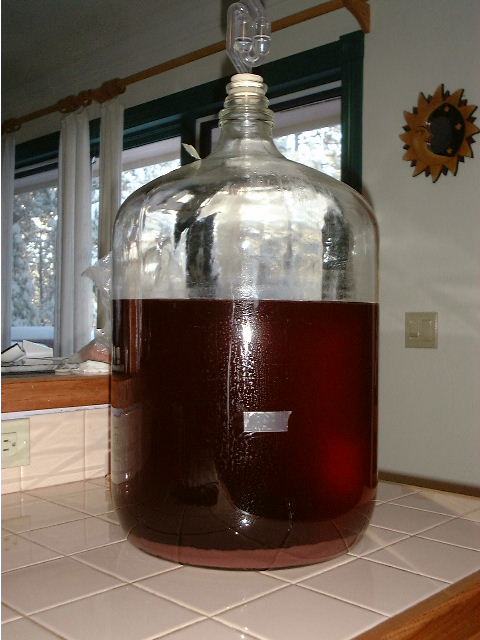 5. After fermentation is complete, the beer is either bottled or kegged for consumption. Here my friend Kevin and I are bottling the beer for his wedding. We named the beer "Bachelor Brown Ale". Heather and I keg our beer. Kegging saves the work to bottle the beer and it is nice to have two, three or four varieties of beer on tap all of the time.  All of our friends know where the beer freezer is in our house and help themselves to all the beer they want. 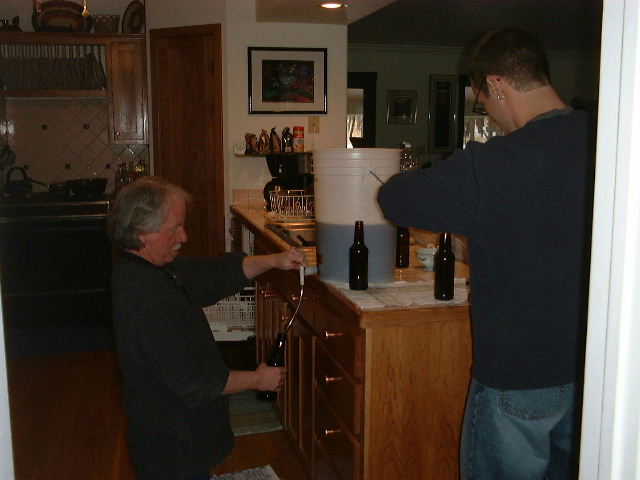 We brew many different styles of beer at home. In the winter we will brew lager beers as they require cold for the lagering process to occur. For summer we brew German hefeweizens and Belgium wits for those nice warm summer days/nights on our deck. We usually have a brown ale of some kind available because everyone likes a good brown ale.  We also periodically brew mead (honey wine) as a change of pace. Mead is the oldest form of brewed alcoholic beverage known to man. We have brewed meads for our nieces and nephew when they got married as mead was the traditional drink for the honeymoon. For real, honey wine for the honey moon.

Heather and I enjoy going out with friends (and you know who you are) to restaurants/brew pub where the beer is made on site. In Colorado Springs this includes: Rockbottom Brewery, Phantom Canyon, Judge Baldwins, il Vicino, Bristol Brewery, Arctic Craft Brewery and My Homebrew Shop/Brewery. There is even a new (August 2008) brewpub/restaurant opening in Colorado Springs called Trinity. It is the buzz of all of our beer drinking friends. Heather and I cannot wait until it opens.

When we travel we search out brew pubs as well. On a recent trip to the pacific north west, we stopped in 15 pubs in 14 days. Heather has the almost unnatural ability to locate brew pubs in towns we have never been in before. It must be her sense of smell or something.

Sometimes you find a very special brew pub that you really like to visit. One of our most favorites was the Kaltenberg Castle Royal Bavarian Brewhouse which used to be in Vail, Co. Unfortunately it has since been torn down as part of renovation in Vail. It was truly a castle of beer drinking. They had one of the best hefeweizen beers I have ever drank. It was sad to see it go. 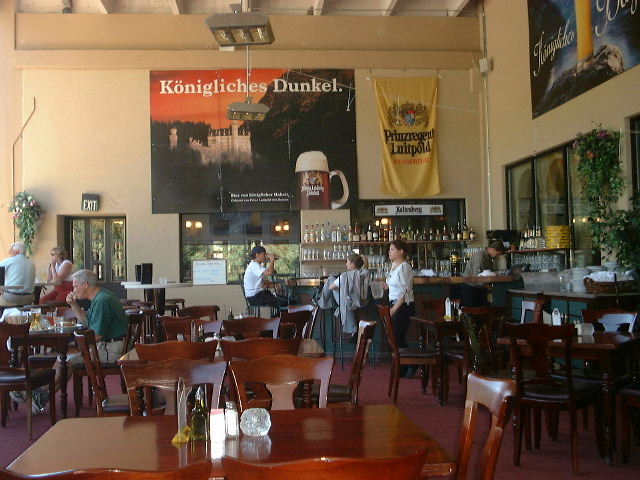 Our current favorite national beer establishment has to be Gordon Biersch. They consistently crank out fine lagers and ales along with excellent food. We have been in Gordon Biersch breweries /restaurants from California to Florida and have enjoyed them all. I've been known to drive way out of our way to visit any Gordon Biersch establishment we are even remotely close to. Check them out if you haven't already.

Recent studies indicate that drinking beer is actually good for you. Check it out.

One of the largest celebrations of beer in the world happens in Denver and is called the Great American Beer Festival or GABF.  It occurs at the tail end of September or the first part of October depending upon the year. In 2006 there were over 1650 beers from 450 breweries represented. It is held at the Colorado Convention Center which is laid out with row after row of tables pouring beers from the various breweries. It is always a lot of fun when you get  41,000 of your closest beer drinking friends in a very large room with an almost unlimited supply of beer. Magical things happen.

Heather and I have been to GAFB four or five times. Here is Heather enjoying herself with a sample of some dark beer. 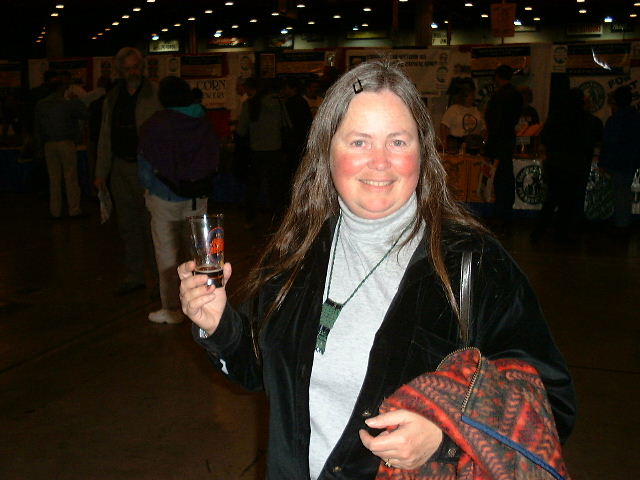 Here are are friends Ray and Sandy (with Heather) getting ready to enter the convention center. 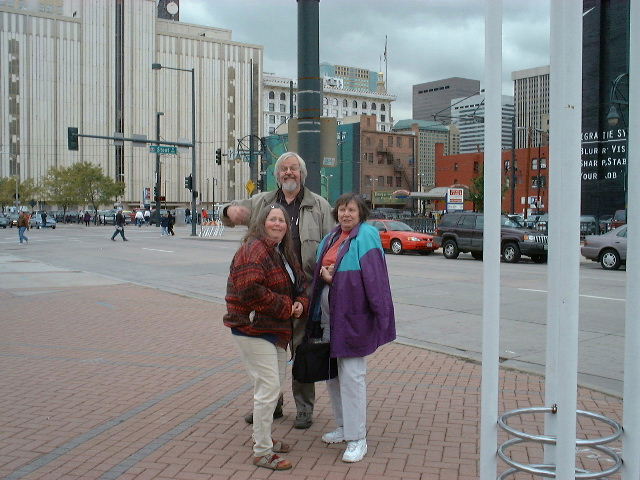 One year my nephew Keola and his buddy drove non-stop from San Diego, Ca. to Colorado to attend the show and the day after the show did the same drive in reverse to get home for work. That is a real beer fan. Here is a picture of Keola at the GABF: 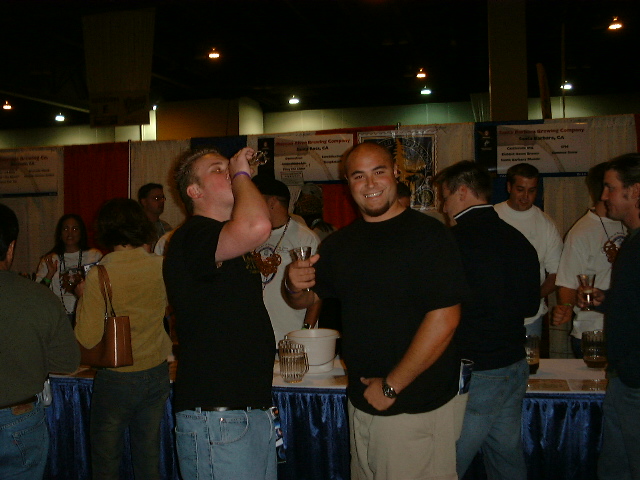 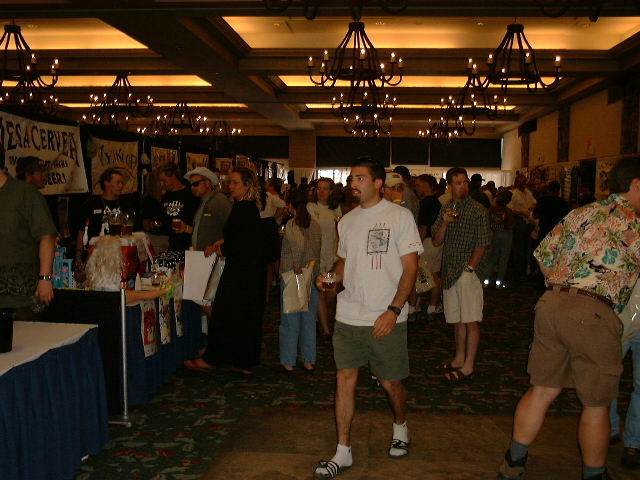 One year we saw the world famous beer traveler and writer Michael Jackson. shown below signing books. We routinely see other beer dignitaries including Ray Daniels, Charlie Papazian, Jim Koch , Dave Resch and many others. 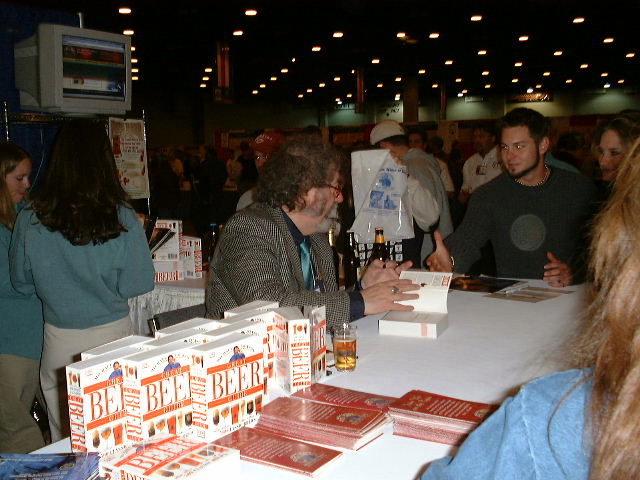 The slogan, "Relax, Don't Worry, Have a Homebrew" is a good one to live by.