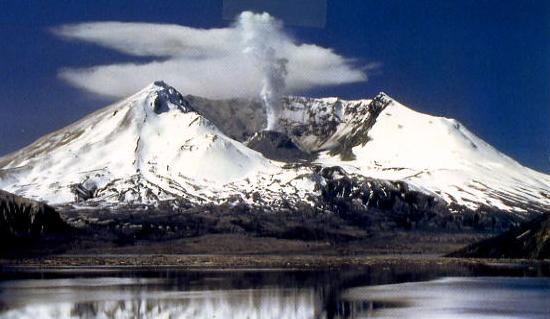 I'm fascinated by geology. Volcanoes, caves, rocks, crystals, hot springs, you name it, I like it. I have had this fascination ever since I was a child. I think it came about because I spent time in Yellowstone National Park every summer for my first 18 years. Yellowstone, as you probably know, has the largest concentration of geothermal activity anywhere in the world. My Mother's family was from Cody, Wyo. which is on the east side of Yellowstone. Cody itself has geothermal formations and a hot springs in town. There are also huge dried up hot spring craters on the outskirts of town. In addition, when traveling to Wyoming from Colorado we always passed through Thermopolis, Wyoming whose claim to fame is the worlds biggest hot springs. 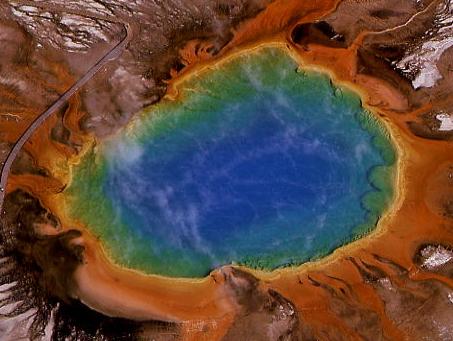 I'm not sure Heather had an affinity for geology when we first got married but she sure does now. We have traveled all of the western US in search of mining areas, hot springs, volcanoes and caves. In our younger days we spent a lot of time in caverns in Colorado including Cave of the Winds, Hubbards Cave, Fairy Cave, Fix'n to Die Cave, Fulford Cave and Groaning Cave just to name a few. We have also traveled to see every point of geological interest we know about. Our geological travels have taken us to Hawaii, Oregon, New Mexico (yes New Mexico does have active volcanoes), Washington, California, Idaho and Iceland in search of volcanoes. In 2011 we went to Italy and Sicily on a tour and climbed all of the active volcanoes. Details of that trip are available here.

I also have a rather substantial library of geology books with an emphasis on volcanoes. As an interesting geologic aside, check out the book "The Deep Hot Biosphere" by Thomas Gold for a very interesting theory on the abiogenic origin of petroleum.
This is a lava tube we climbed through in Idaho.
See me down there? 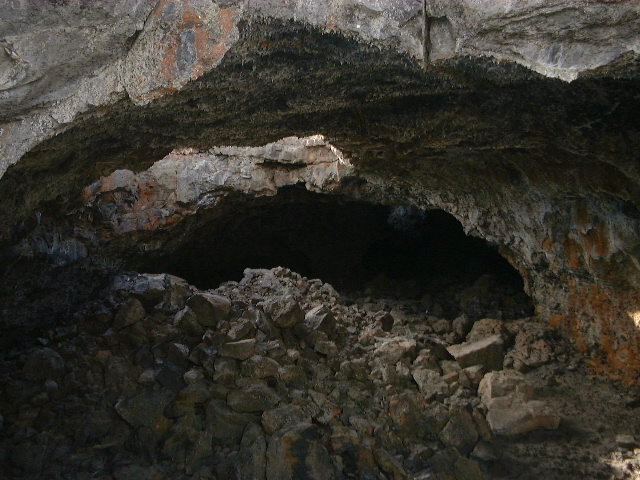 Here is a picture of the spectacular Mammoth Hot Springs in Yellowstone National Park. 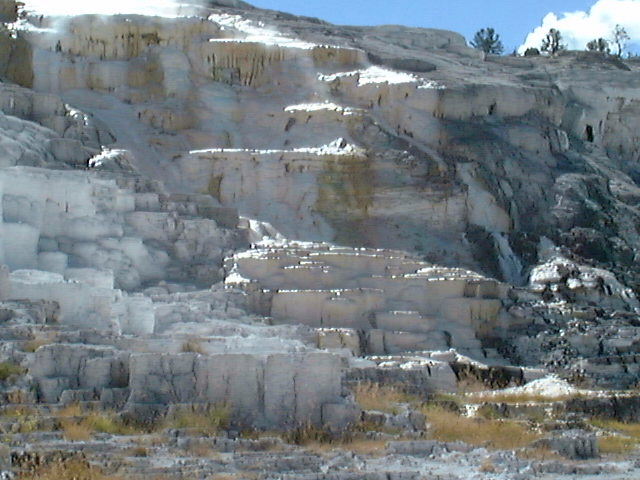 Here is a picture of the Morning Glory Pool in Yellowstone National Park. Is this pretty or what? 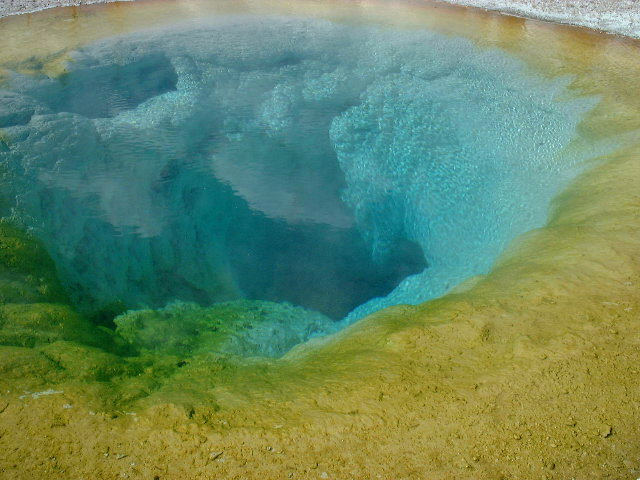 We are rabid collectors of rocks and crystals. If you have ever been to our house you already know that. We have rocks and crystals in every room of the house, in every closet and in most drawers. Some of our prise specimens are shown below.
This is citrine. This crystal structure is called a plate because the crystals formed on a somewhat flat surface. 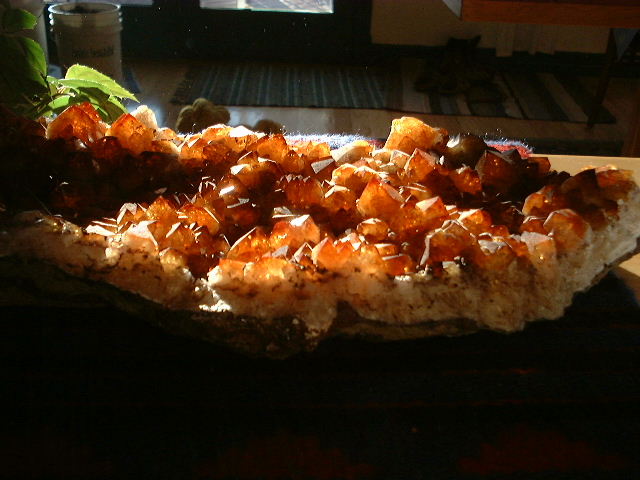 As you can probably tell from the next series of pictures Heather and I really love amethyst.

The specimen below is celestite which has a wonderful blue gray crystal. 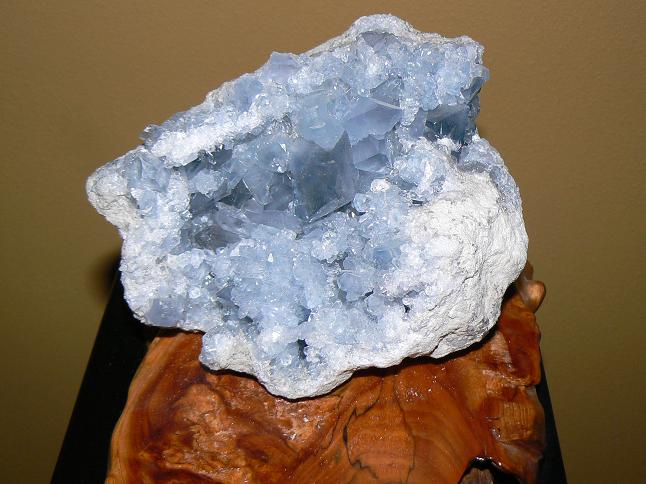 Labradorite has a wonder iridescent quality to it. You can see the blue glow in this picture 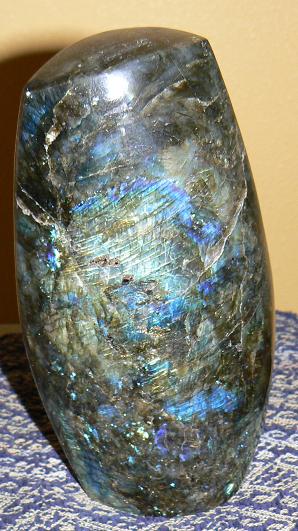 A find from the fall 2006 Denver mineral show, lapis from Afghanistan. Its hard to tell from the picture but it has ribbons of gold colored pyrite flowing through it. It is a really beautiful piece. 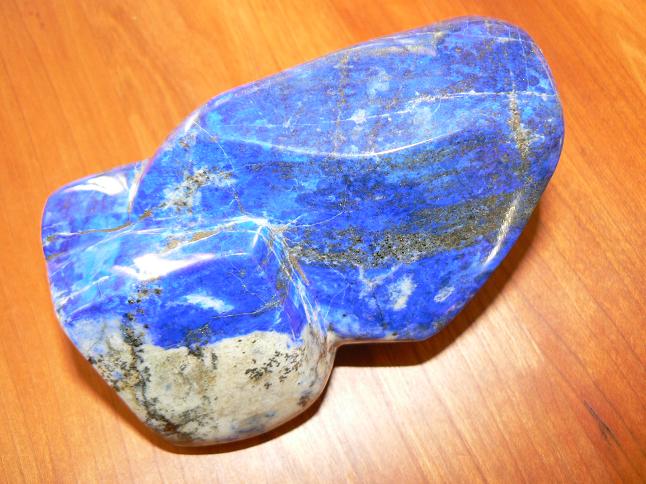 Smokey quartz crystals are alway nice. Here is a specimen we got in Arkansas. 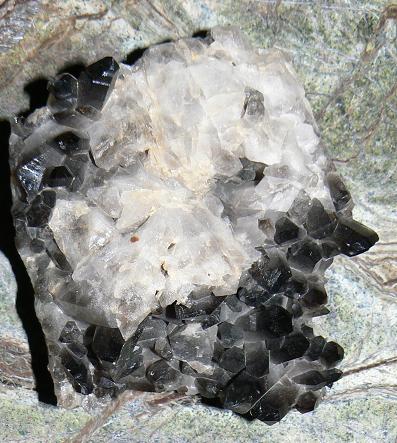 This specimen of Rhodochrosite was found in the Sweet Home Mine in Alma, Colorado. These pieces are somewhat rare. 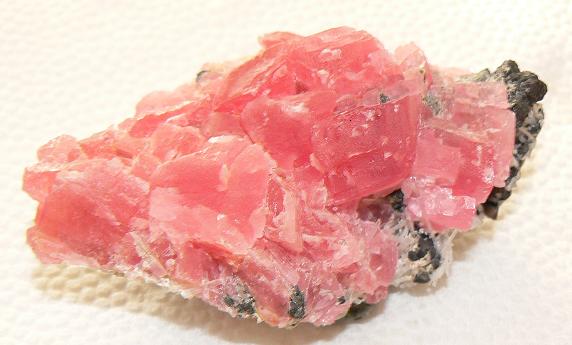 An Australian boulder opal specimen which we bought at Taos Gem and Minerals many years ago. We stop at the store every time we go through Taos. They have a wonderful collection of rocks and gems. 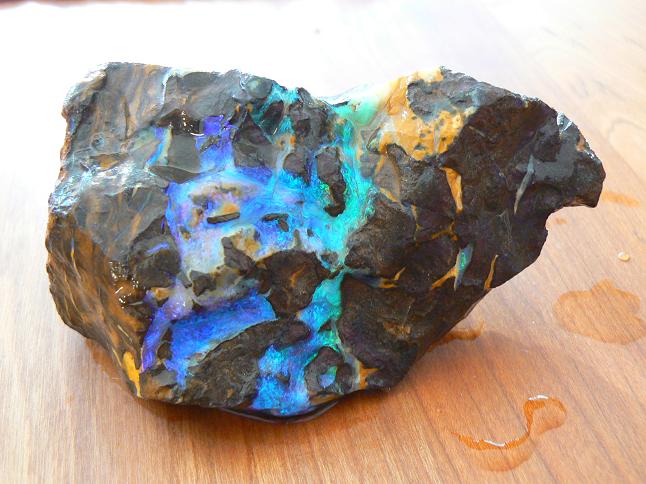 A collection of crystals and an amber tree setting on a slice of slate with dendritic patterns. The slate was given to us by our friend Mark. He found it and thought we would like it and we do. This is a constantly changing display that usually is found on the map table in our living room. From top clockwise we have our amber tree made for us by a friend in Denmark from amber he found on the beach, yellow crystal sulfur, an amethyst stalactite, amazonite we found near Lake George, a cluster of quartz crystals, rhodochrosite crystal cluster and finally more quartz crystals that have titanium deposited on them. This makes them iridescent. 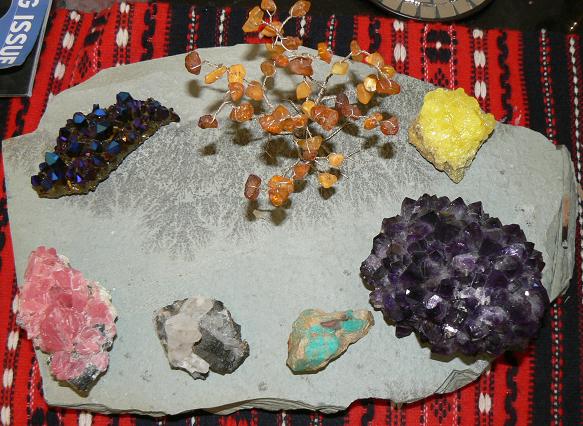 Heather and I routinely attend Denver's mineral shows. The Colorado Mineral & Fossil Show happens in the spring and fall as does the Colorado Gem & Mineral Show. We have also been to Quartzsite, Az. for their big gem show. We want to attend the grand daddy of them all the Arizona Mineral & Fossil Show held in Tuscon, Az. but we haven't got there yet. One must have something to look forward to. The Denver Museum of Nature & Science has the Coors Mineral Hall which contains a huge selections of rocks and gems. You should check this out if you haven't already.

I have loved fluorescent rocks since the first time I saw them as a child at the Griffith Park Observatory in Los Angeles, CA. I guess there is a little kid still inside me because I still love them.  I have collected quite a number of specimens over the years, most from EBay but some that Heather and I have found ourselves. I first bought a portable black light below

After I had accumulated a bunch of these rocks it became clear that I needed a better way to display them. At about this time I had just finished setting up my wood working shop so I decided to build a display case with built in white and ultraviolet light sources. Switches on the side of the display case control which light is on. The display case was the first major wood working project I did in my new shop. Here is a picture of it. 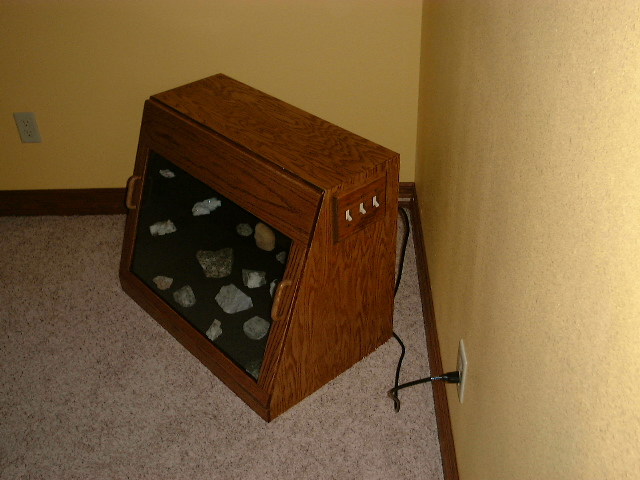 Below is a marginal picture of the display case with only the white light on. A white light is built in so people can see what the rocks look like before being stimulated by ultraviolet light. Most are very plain and you would never have any idea of how special they really are. If you picked up many of these rocks you would just put them back down as they are typically uninteresting. 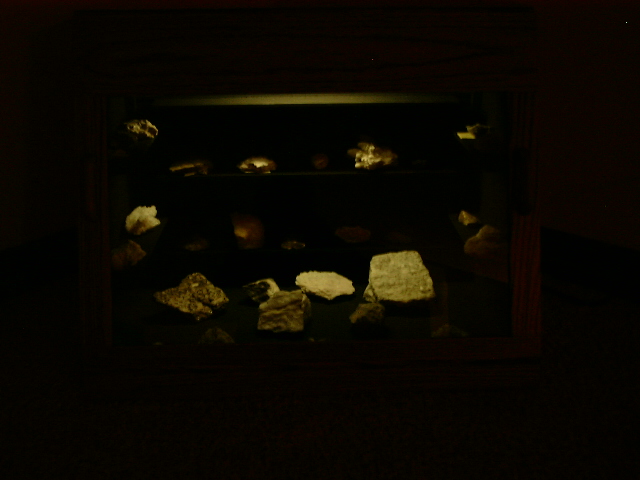 The picture below was taken with both the short and long wave lights on. You can see a little of the case in this picture. 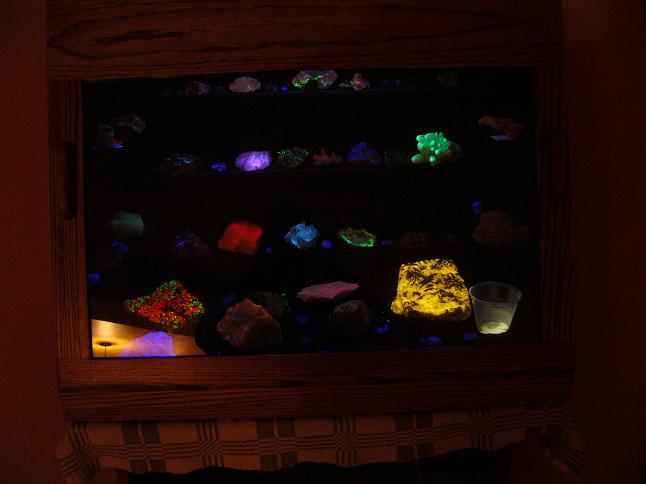 Below is a closeup of the rocks doing their thing. This picture barely does justice to the glowing rocks. They are much more impressive up close and personal. We have rocks that glow in about every color of the rainbow. Some of the rock exhibit phosphoresce meaning they continue to glow even though the ultraviolet lights are turned off. Some phosphorescent rocks will glow dimly for hours after exposure. Some other rocks exhibit tenebrescents meaning that the physical color of the rock changes after exposure to ultraviolet. If these rocks are then put into the sun, their natural color will return. 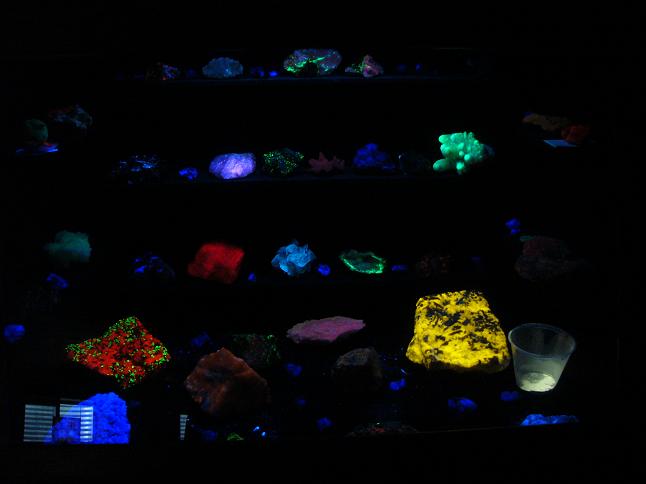 When I do my fluorescent rock display show for guests I never fail to get a gasp when people first see the glowing rocks. They are truly a wonder of nature. If you asked me nicely the next time you are at our house, I'll give you a personal show.