We have an Old Town Loon two person sea kayak that we use on lakes around the west.  The two images below are not our personal boat but pictures from the Old Town website..

Our boat is equipped with a rudder that is controlled by foot pedals available to the person in the rear seat which is usually me. We generally paddle for exercise or to view the scenery but also sometimes for fishing. The kayak is fiberglass but still weighs 74 pounds so it takes two of us to move it around. We can carry our boat on our truck or on our RV.
Here is our truck and kayak near Flaming Gorge Reservoir on the Utah side. 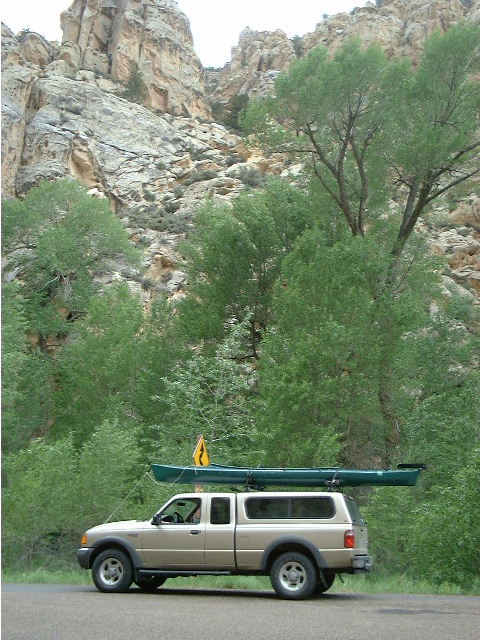 Here is the kayak on our Rialta RV. 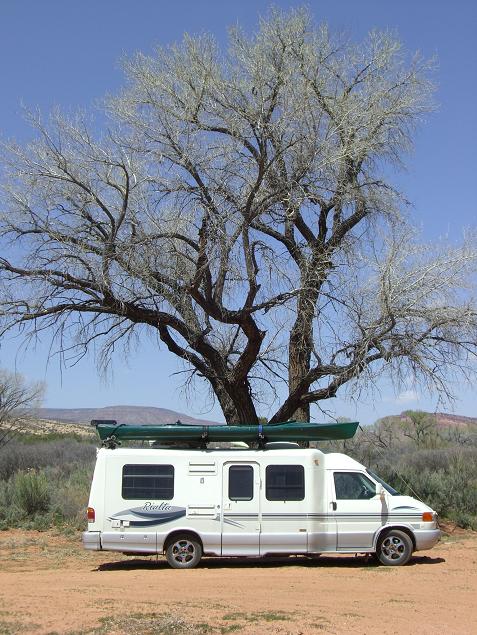 Locally we take our boat up on Pikes Peak to either Crystal, North or South Catamount lakes. We do this trip a handful of times a year. Here are some pictures from up on the Peak. The water level was really down in the first picture. Too many people watering their grass lawns in Colorado Springs I guess. This was taken at the height of the drought. Here I am with my rubber kayak jacket on looking at the low water. 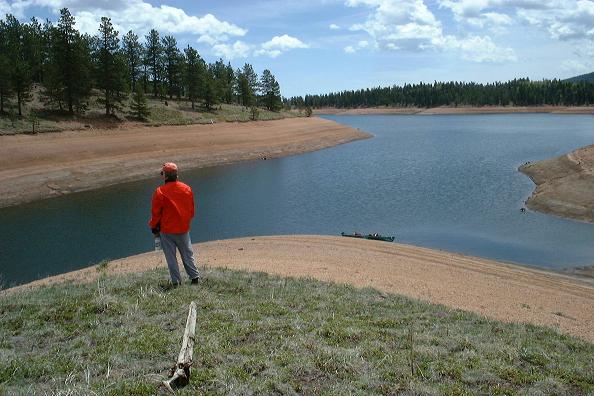 You can just see Heather's paddle in the lower right corner of this picture. 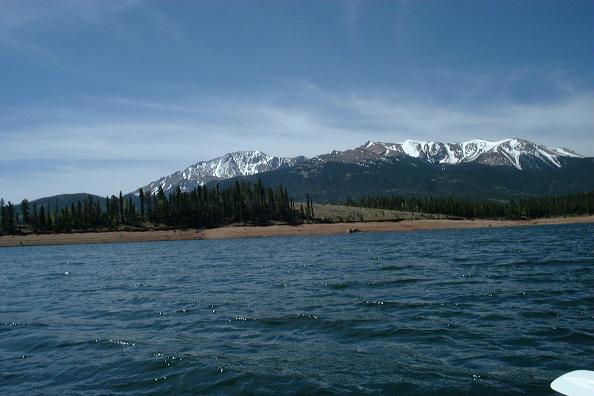 Another view of Pikes Peak below. 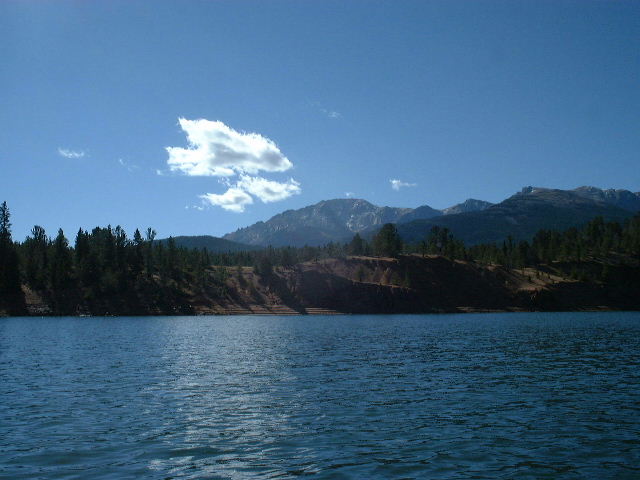 Here is Heather getting ready to shove off. 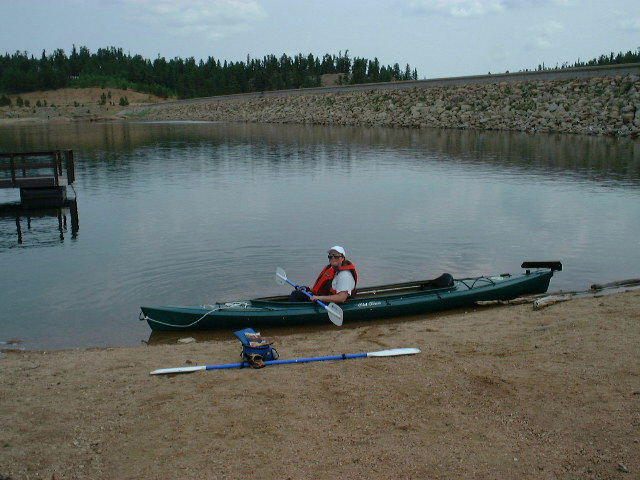 Here she is again in the front seat where she usually is. In this case she is a front seat driver because she tells me where to go and since I have the steering pedals in the back seat, I just follow directions. A lot like when we are driving together in a car (;>). 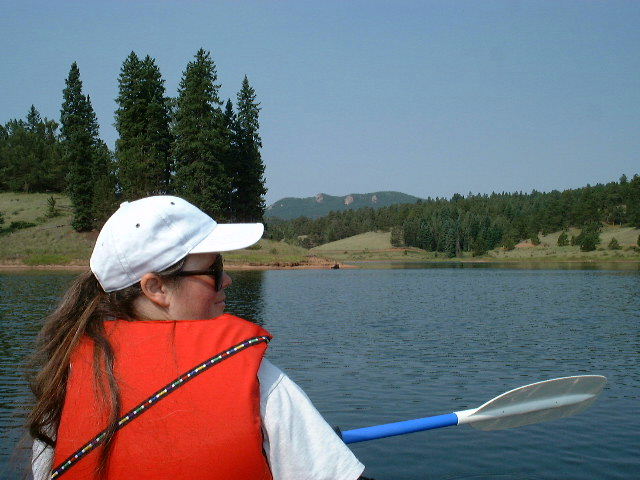 We also take the boat to Rampart Reservoir outside of Woodland Park. Rampart has a lot of inlets which let us do some exploring. One year we saw a rather large turtle on a rock in the lake. He must have been an escapee. 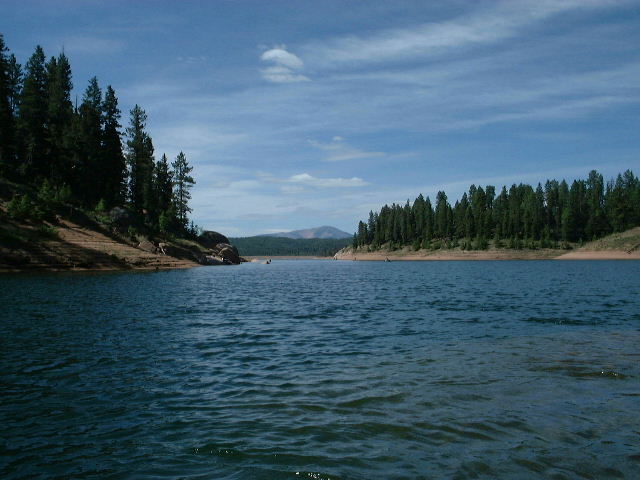 Dillion Reservoir is also very nice when the water level is decent. We boat there a lot and ride bikes and camp in the area as well. The Frisco/Dillion area has been hit real hard by the pine bark beetle so most of the trees in the town and the campgrounds are dead and are being removed. The extent of the damage to the forest is incredible and the trees will not return in our lifetime. It is really sad. Here's our boat with Dillion Reservoir as a backdrop. I think we stopped to eat lunch. When the water level is normal like it was in 2006 you can rent kayaks on Main Street in Frisco and head out on your own.  You can see the sail boats in the background. It is fun to take the kayak through the marina and look closely at all of the boats. 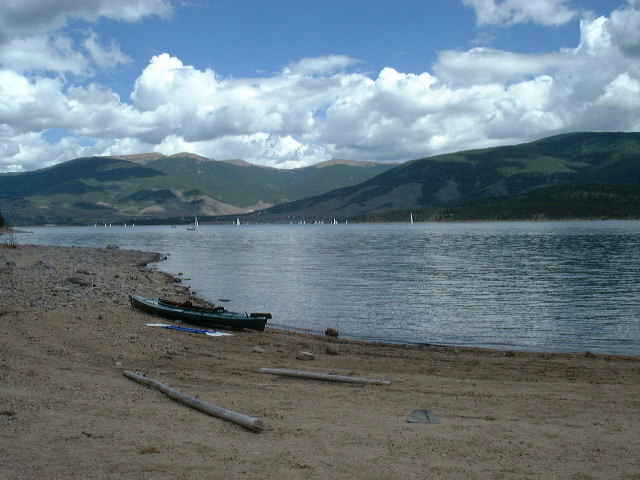 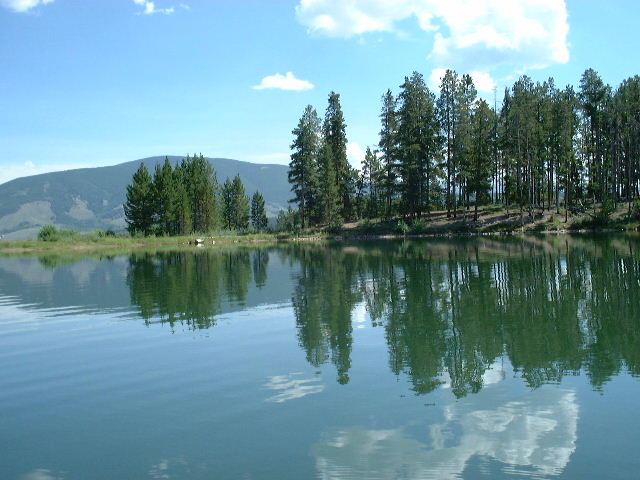 Twin Lakes is always nice. You can have a nice paddle in both of the lakes and see the abandoned Inter-Laken hotel complex that you cannot get to by car. Some years you can also grab a nice German meal and great beers at the Twin Lakes Lodge which is a old converted house of ill repute. The rooms in the lodge are named  after the working women who occupied them. Each room has old time feather beds which are quite something to sleep on. The fall colors at Twin Lake are spectacular. 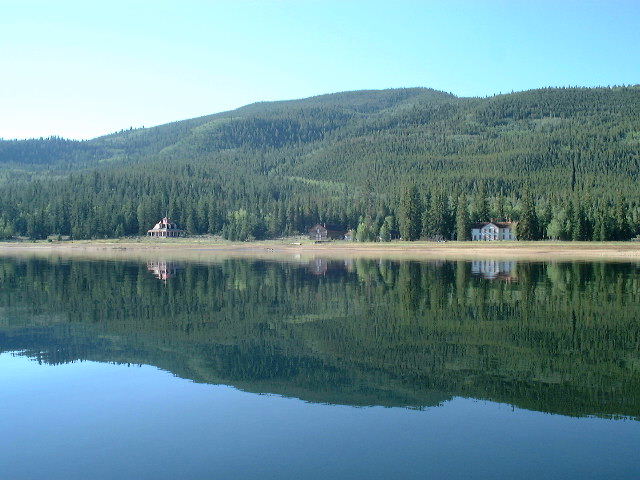 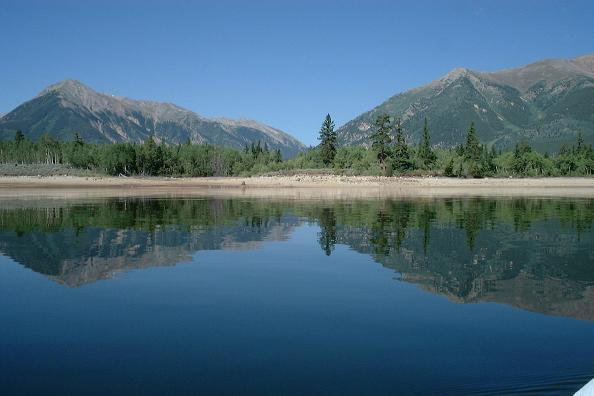 Turquoise Lake outside of Leadville is another nice kayaking spot. Here is an image to give you an idea of what it looks like. It is beautiful as are all of our local lakes. 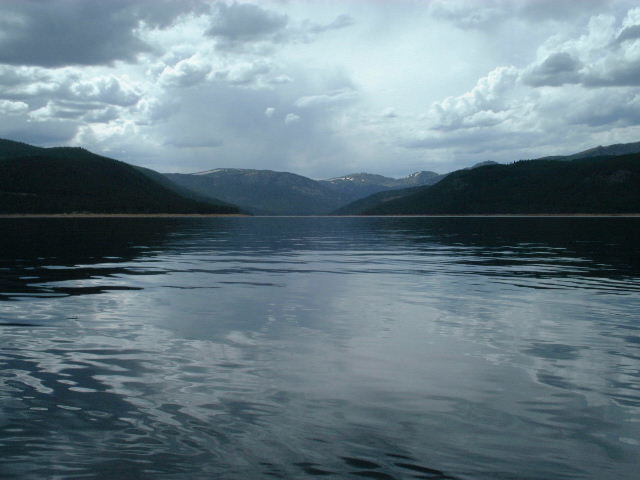 In 2003 Heather and I spent a week boating at Flaming Gorge Reservoir which spans the border between Wyoming and Utah. The Wyoming side is pretty barren and hot in the summer with no trees in sight for shade. The Utah side is quite the opposite with beautiful camp grounds, plenty of shade, lots of geological interests, wonderful flowers, lots of ospreys, big horn sheep and seriously great boating. It was a great trip and we want to go back at some point. Probably as soon as I get a kayak rack on the RV I'm thinking. In the gorge there are lots of shear rock wall and a bunch of little caves and overhangs on the water that you can pilot the boat through.  We saw a lot of really big fish but they paid no attention to my line. Heather was my trawling motor as I fished. I just had to point and she would slowly move the boat in that direction.
Here are a selection of pictures from Flaming Gorge Reservoir. 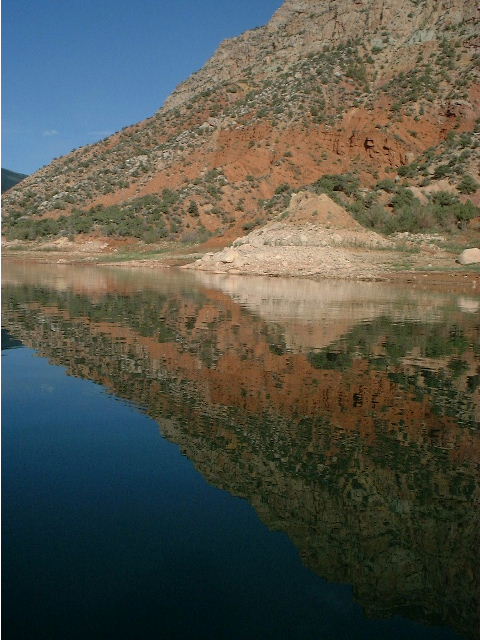 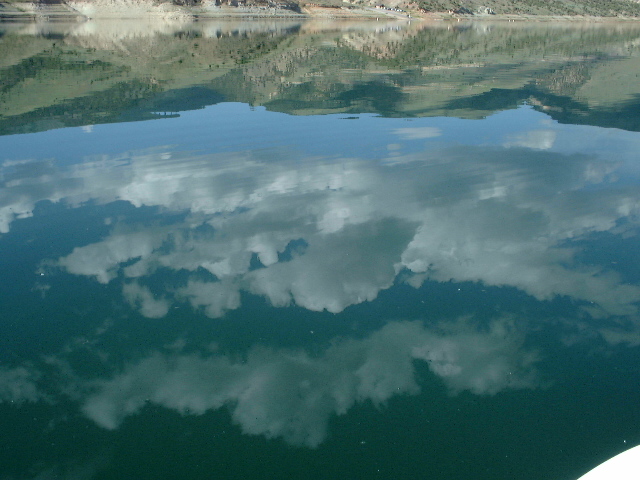 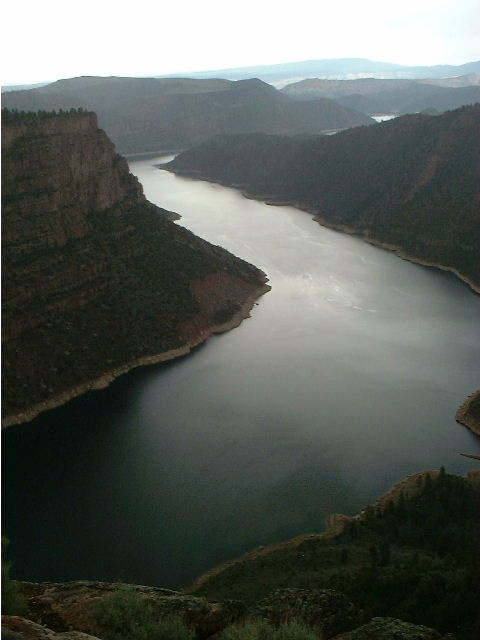 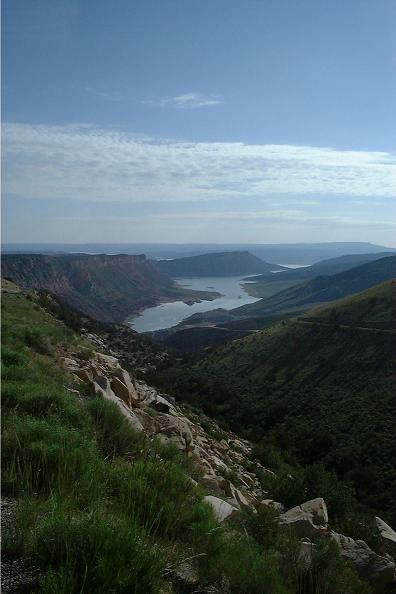 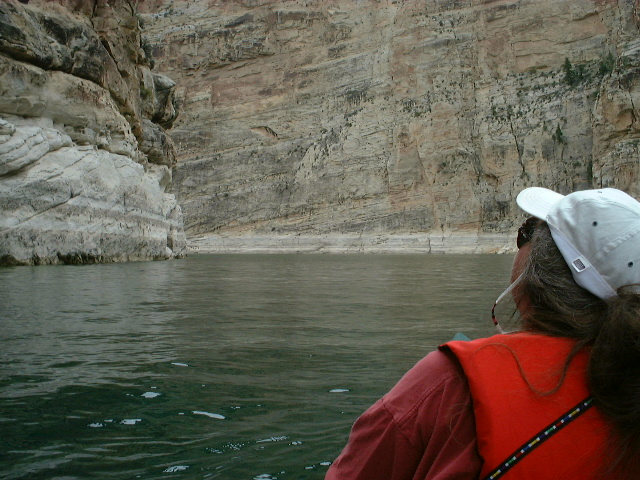 On another trip Heather and I took our kayak to Jackson Lake in Grand Teton National Park. Here are some pictures from that trip. It was unfortunate that the north shore of the lake was on fire the whole time were were there. It was sure nice to go into the Jackson Lodge for draft beer after a hard day of paddling. 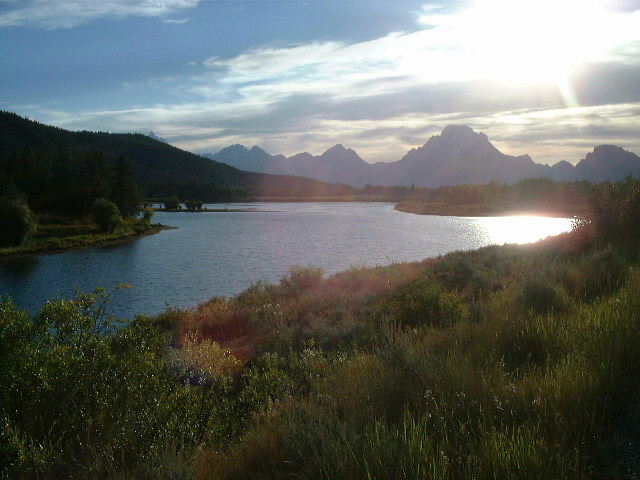 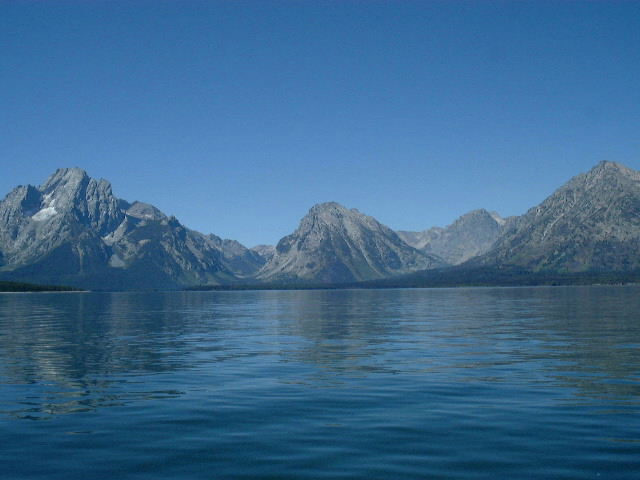 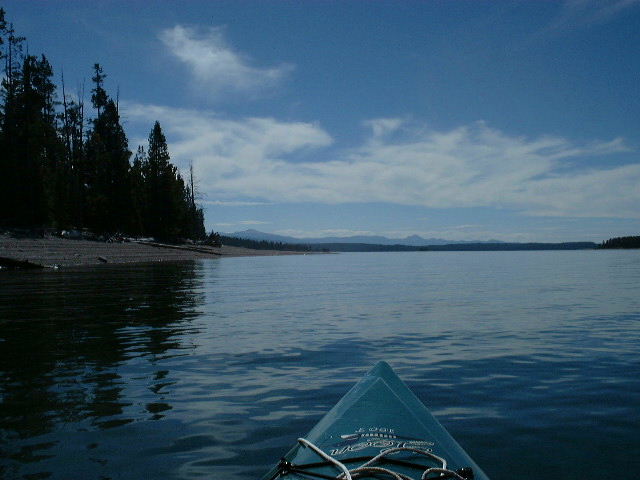 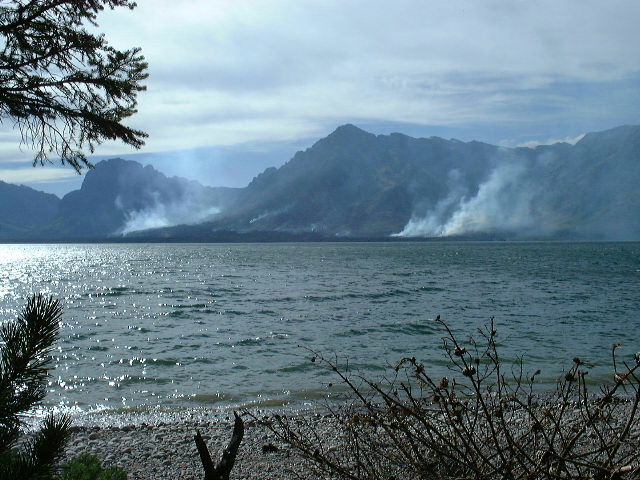 In April of 2008 HH and I went to Lake Powell in Utah for some kayak action. This was the first trip where we could carry the kayak on our RV. It was a very nice camping/kayaking trip though rather windy at times. 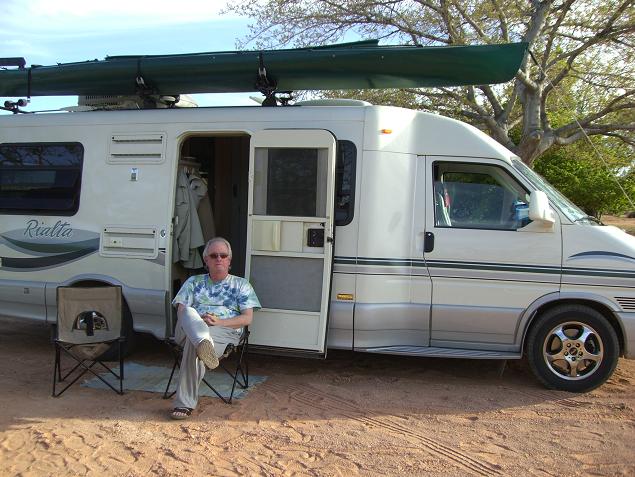 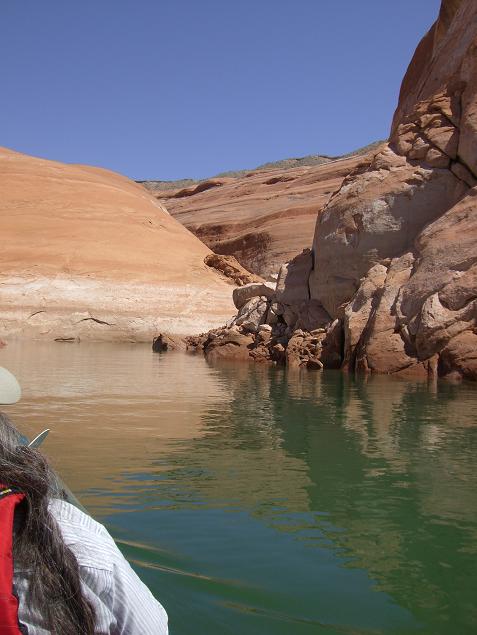 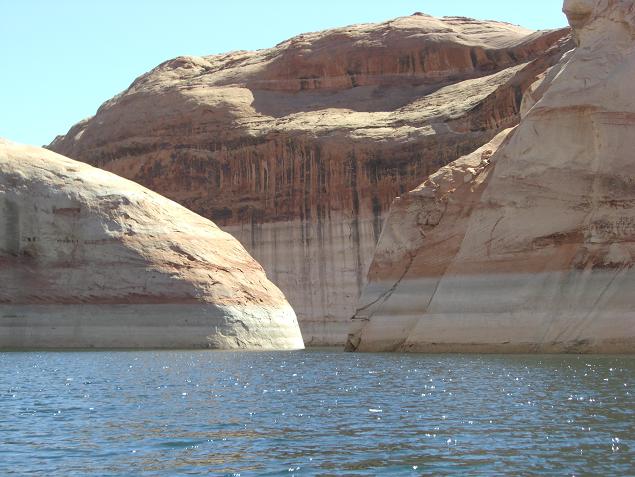 Notice the scale in the image below. There are two power boats in the distance. In some places the walls were completely vertical and a couple of hundred feet above our heads. In some places there wasn't any place to get out of the boat because the verticle walls went directly into the water. This was a little scary when the wind came up. 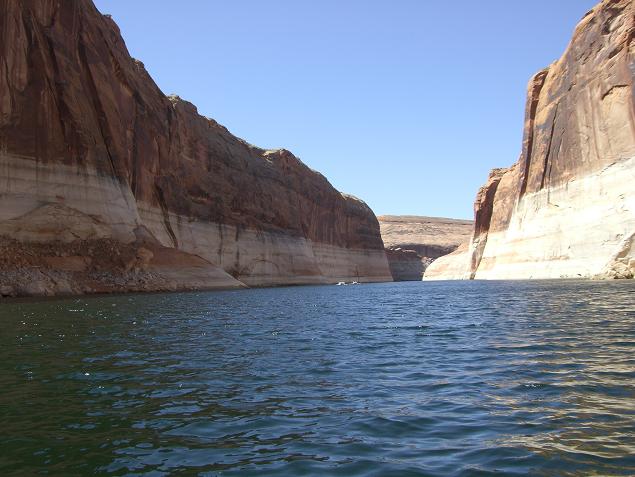