I knew I wanted to play music since the night I saw the Beatles on the Ed Sullivan Show in 1964. I immediately started making plans to get the correct hair cut and cloths. Not being able to play an instrument didn't seem to be such a big deal back then.  Years later I got my parents to buy me a cheap acoustic guitar and get me some basic group lessons. The rest as they say is history.

I started out playing rock in bands that were trying to be louder than anyone else but more recently I enjoy playing a lot of acoustic guitar with a finger style and/or classical bent. Over the years I have met a lot of musicians in Colorado Springs mainly through work and have been in numerous bands with them. The most important of these bands were:

Tandem with Mike and Shella Griffus. We played top forty hits and some originals in and around the Springs for probably five years. We played many gigs including the Manitou Art Festival numerous times and a lot of weddings, company parties and private parties. I met Mike and Shella through Heather because Mike and Heather worked together at Inmos Corp. in the early 80s'

Three on the Trail with Steve Luteman and Maria Hernandez whom I met working at IBM. In this band we played Old Time music which is a precursor to blue grass. Steve played guitar, Maria played fiddle and I played bass. We did mostly all instrumentals. Steve and Maria were married. They moved back to North Carolina when IBM closed here.

Hydrogen was formed from people who mostly worked at ChannelPoint a now defunct startup company in the Springs.  Information about Hydrogen and Lesser Mortals is available here.

Lesser Mortal was a follow on to Hydrogen. See above link for more info.

Evangenitals was a garage band I played in for years. See the bottom of this page for more info.

While I do enjoy playing with other people I also enjoy recording myself solo in my little recording studio. On my recordings I play all of the instruments and sing all of the vocal parts. I've only recently begun singing so I have a long way to go before I win any awards (;>) for my vocal efforts. Most of the recordings I have done were made into CDs some of which are detailed shortly. For a look at my studio click here.

I do live gigs around the Colorado Springs area from time to time. If you are interested in having an acoustic musician at one of your functions please contact me at: calhjh@gmail.com. Here I was playing at the Road Kill Chili Cookoff aka Ass on the Grass festival in Woodland Park on 8/18/12. 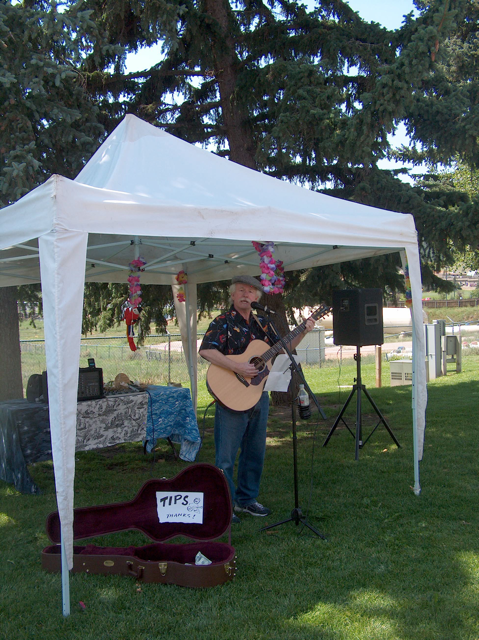 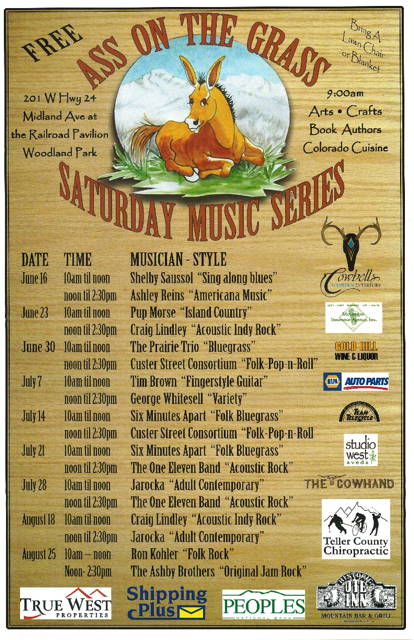 I want to make it perfectly clear, I record these songs/CDs with total respect for the artists' that wrote and performed them originally. I never have and will never try to make money on any of these songs. My CDs cannot be sold for any reason because I don't own the rights to many of these songs. I record these CDs for myself, my family and my friends, never to make money.
Here are the CDs I have recorded and/or mixed in my little studio. They appear in roughly chronological order from oldest to newest:

Click here for a page of other tunes in the works.

The "Evangenitals" were a true garage band because we never played anywhere else but garages. We played together for about ten years. We played a mix of classic rock and newer adult alternative tunes. Here is an actual picture of us playing for a party we had at our house in the Black Forest a while back. A good time was had by all. 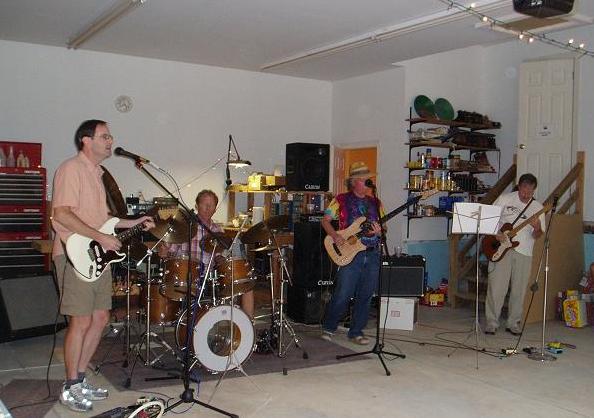 The Evangenitals were (from left to right):

And yes, we know we will probably be going to hell for choosing the band name.

Our current band is called The 495's. Check out our webpage here.

Over the years I've tried to help quite a few people learn the basics of guitar playing by offering free group lessons at companies where I worked. As I tell all of my adult students, it is really hard to learn how to play guitar as an adult because of the pressures of life. Learning guitar takes hour upon hour of practice and it is hard to find that time what with the responsibilities of living and family. Most of the people I've given lessons to have stopped playing but every now and then I get those rare students who continue on and it make me very happy. You know who you are. I gave free lessons at ChannelPoint and most recently at Cassatt. The students at Cassatt gave me this nice poster and other very thoughtful gifts at the conclusion of the 10 week course.  Everyone in the class signed it for me. This poster does seem to signify the long road ahead for guitar players. 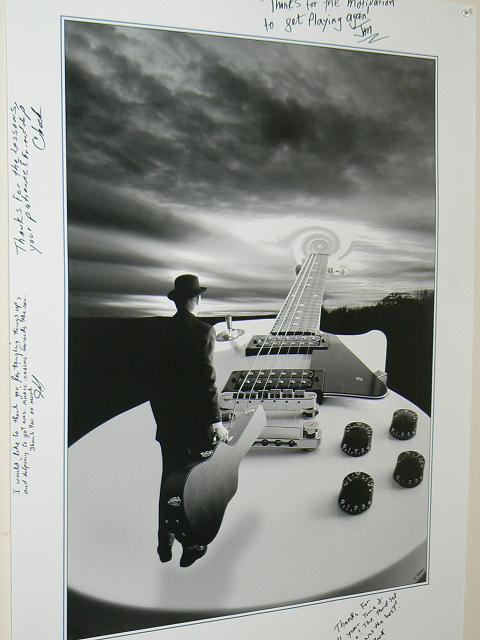 At the Cassatt 2006 Christmas Party held at the Dale Street Cafe, many of my guitar students played songs together as part of the entertainment. It was great to see!